When running the wizard to add the UM role to your Exchange 2010 Sp1 server, you may have this error appear in the install wizard:

ErrorRecord: System.Runtime.InteropServices.COMException (0x800706D9): There are no more endpoints available from the endpoint mapper. (Exception from HRESULT: 0x800706D9)

I created this powershell for our internal onboarding process, figured I would share it with the masses.

I think there are a couple good takeways from this script, it remotes into Exchange 2010 and Lync Server 2010 Powershell sessions, so nothing except Powershell 2.0 is required on the client side, which is standard with Windows 7. It also shows how you can simultaneously use Exchange and Lync powershell commands in the same script to get things done.

A couple of disclaimers:

I am in no way advanced at powershell scripting, so nothing fancy here.

This was developed specifically for my internal needs, you will probably have to add/remove variables and requirements.

Script is above, any freedback is appreciated, if you improve on this at all, I would love to see it as well.

After upgrading my Exchange 2010 environment to SP1 we ran into an issue where our Auto Attendant would not transfer calls to our OCS Response Groups and users. If you dialed by name or number, it would transfer, but if a key mapping was set to transfer to an extension, it would fail.

Key Mapping 4 is set to a separate auto attendant that is speech enabled and intended for use with saying a persons name or extension to reach them.

When a caller pressed the 1 key, the attendant would say “The call could not be transferred”

When pressing 4, and then entering the same extension, 1000, the call would dial properly.

I setup a new AA to run some tests and tried everything imaginable to get this working. No matter what I did, the key mappings would not transfer to an extension, or a full DID of a user off of the auto attendant. All other dial by name or extension functionality worked.

Running traces on the OCS front end and mediation showed no sign of a refer happening, which would appear when the call transfer was attempted.

I finally broke down and opened a PSS case, they had me set a dialing restrictions rule on the Dial Plan and Auto Attendant to allow all numbers.

Now, normally ,this was only used to dial outbound, so if a user setup dialing rules on their mailbox, or the auto attendant or dial plan had to call a number outside of the organization. I had previously no rules that allowed for any internal number patters, only 10 digit external number patterns.

This is just a normal allow all rule:

By setting a rule to allow all dialing and applying it to the dial plan and auto attendant, the issue was resolved.

I will update as soon as I find out if this is a bug, or if it is how it is going to be going forward.

So, I heard about a few improvements with Exchange 2010 SP1 being released. (Full List Here)

One cool thing I just saw, was presence inside the transcription on my voicemail. This may have been there in 2010 RTM and I just didn’t notice it, but this seems new to me. 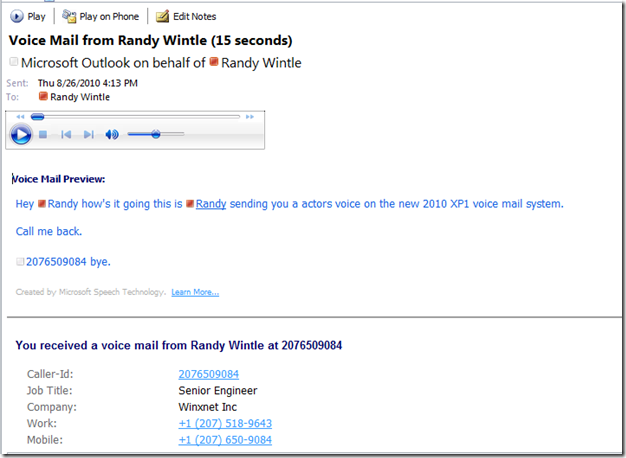 As you can see, it detected my name, and put presence next to it, It also added presence to the phone number I left in the voicemail, allowing me to call directly out of the transcription text. This is just another one of the examples as to why the Microsoft Unified Communications package is truly amazing.

The  translation still isn’t perfect, but its getting better and better